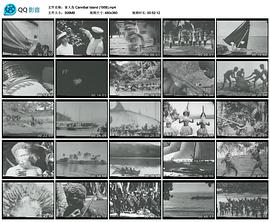 在这部食人岛纪录片片中,GOW (1931, 63 min.) is not only a true curiosity but also in many ways a key influence of later Cooper and Schoedsack productions including King Kong. The footage in Gow was produced by Edward A. Salisbury, a wealthy British adventurer, who in 1920 set sail in an 80-ton yacht equipped with a motion picture laboratory to, in his words, catch and hold for history a photo record of the fast杁isappearing races of the South Seas Islands�. Cooper and Schoedsack were among the cameramen on this two-year expedition that documented genuine head-hunters and cannibals along its route. The material was originally released as four separate films in the silent era and was consolidated as the film Gow, The Headhunter for an illustrated lecture by expedition member William Peck. Peck recorded his own cringe-inducing commentary in 1931. Gow was reissued as an exploitation film into the 1950s under the title Cannibal Island, but it was made with a serious purpose. True to Salisbury抯 intent, it indeed documents vanished cultures and is brilliantly illuminated here with an exclusive audio essay by Matthew Spriggs, Professor of Archaeology at the Australian National University and author of The Island Melanesians. Gow is mastered for this edition in high definition from the original 35mm fine grain master positive.

Though the release date says 1956, this film consists mostly of footage from a 1931 documentary called "Gow the Killer." It was the first sound film to deal with cannibalism, as it documented the social life and customs of primitive tribes that in fact did engage in cannibalism.