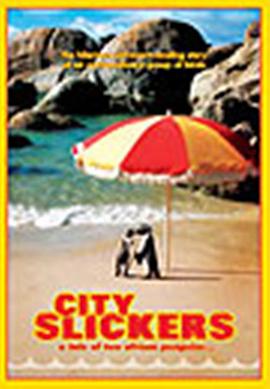 在这部城市企鹅纪录片片中,On October 7th in Cannes, France, the International Academy of Television Arts & Sciences announced that "City Slickers: a tale of two African penguins" had become the first South African television film to be nominated for an International Emmy. The winner will be revealed at the 30th International Emmy Awards Gala in New York City on 25th November 2002. The International Emmy awards, unquestionably the highest award recognising excellence in the world for television production. The International Emmy awards is the most ambitious global screening ever organised in the world of the television competition: 24 panels of the most qualified jurors judging the best programs produced around the world in the past 12 months�. City Slickers - A hilarious yet heart-rending story of two African Penguins. Over two years in the making, using remote-controlled and infra-red sensitive cameras, South African wildlife film-maker Trevor de Kock's CITY SLICKERS lifts the lid on the astonishing life of the urban penguin. Locally produced and filmed this remarkable documentary has wooed television audiences across the world since completion in March this year. On Discovery in the States it was the most popular programme of the month and was re-screened six times in two weeks, it was translated into Japanese and watched by millions of people in Japan, it has also been screened all over Europe with fantastic success. To coincide with the second anniversary of the Treasure oil spill disaster 慍ity Slickers� has recently had various local charity screenings in aid of Sanncob and has just completed a two month run on the 慴ig screen� at a Cape Town cinema. The local television broadcast of the film is scheduled for December this year. Summary 15 years ago, a handful of African Penguins, normally found only on remote islands off the Southern African coast , stumbled across one of the Cape's most beautiful and popular tourist beaches. They swam, they saw, they conquered. And today, Boulders beach is home to more than 4,000 of these delightful, resourceful and entertaining seabirds who live side by side with their human neighbours - well, most of the time! These knee-high invaders not only share the beach, they dodge traffic, scale fences, and take over gardens, the golf course and even the occasional bedroom! For our two feathered stars, Henry and Margot, it's a tale of romance and the challenges of parenthood, separation and a penguin's worst nightmare, oil ! A Pelican Pictures & Off The Fence Production for Animal Planet/Discovery (USA), NHK (Japan), ZDF (Germany) in association with Channel 5 (U.K), RTBF (Belgium) and France 3&5. Filmed, Edited & Produced by Trevor de Kock, Narrated by Graham Merrill, Music by Grant Mclachlan & performed by members of the Cape Town Philharmonic Orchestra. Executive Producer Ellen Windemuth. Trevor de Kock started his career at the SABC twenty years ago, he then graduated from the London Film School before returning to South Africa to make many films for the BBC as well as for National Geographic and the Discovery Channel. He has also filmed and worked with Sir David Attenborough on many of his highly acclaimed natural history series� for the BBC. http://www.safilm.org.za/news/article.php?uid=584